​Thomas Messenger was the foremost designer of greenhouses in Victorian and Edwardian England. His company, Messenger and Co, based in Loughborough, defined the standard for conservatories and greenhouses for generations and his designs are still copied today.

The Thomas Messenger Greenhouse may be a complete wreck, but to our surprise still a productive one. Despite being open to the elements this vine is still growing well and producing grapes! Probably due to 2016 not being the hottest of summers, these grapes are quite sour so as all gardeners say ‘maybe we will do better next year’.

Describing themselves as horticultural builders, heating engineers and iron founders, their designs typically had half brick walls supporting a white painted hard wood glazing framework. Temperature was controlled by means of hot water pipes and forged iron ratchet window controls. Many were bespoke to the client. 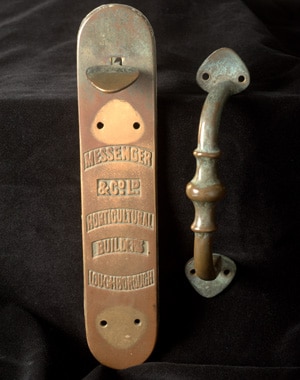 In the 1920's the Chester Farm estate was purchased by the Whitworth brothers and in 1924 plans and a bill of quantities was drawn up by Messrs. Talbot Brown and Fisher, architects for proposed alterations to Chester House. These were major alterations to the interiors, modernising it before Newton Whitworth moved in.

During his occupation of Chester House, Newton installed a very large Messenger greenhouse between the two walled gardens. The Messenger catalogue (c 1934) records him as a client. The works order which more accurately describes the greenhouse as a 'Planthouse and Vinery' and notes that the gardener is a Mr Chas. Ford of The Ivies, Wilby, near Wellingborough. The building was heated, having a boiler in a lower section which fed heat through underfloor channels. Oral evidence indicates that the greenhouse was still in full use in the 1970's.

As you can see from our picture, today the greenhouse is totally dilapidated, but some of the iron work remains such as this door handle (pictured); other pieces of ironwork occasionally emerge such as a piece found by site manager Andy Russell on The Drift (north ramparts of the Roman town). The Messenger greenhouse won't be restored in this first phase of work, but is certainly an exciting and challenging project for the future!​