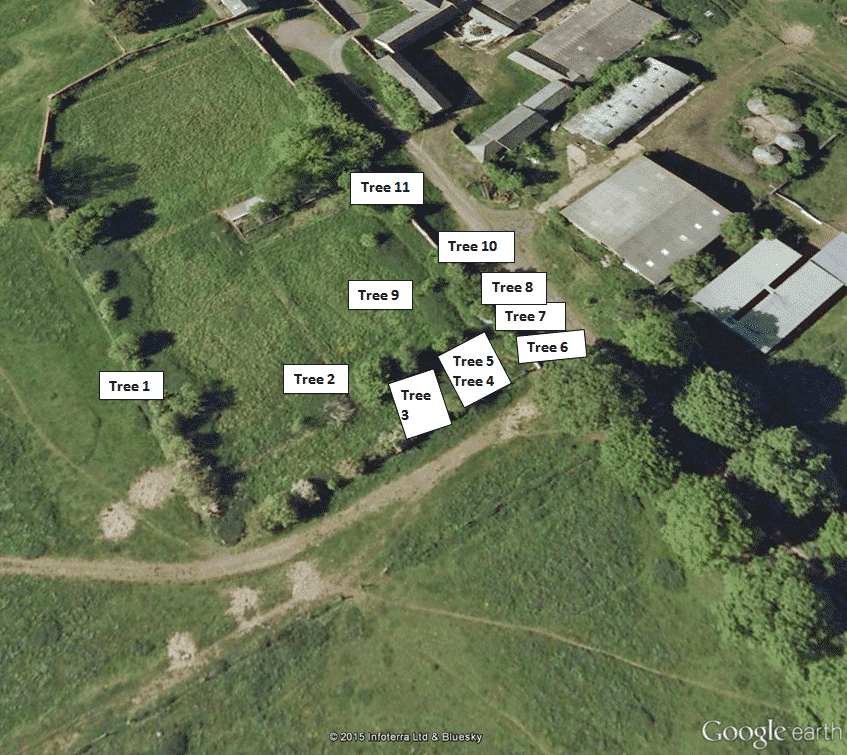 ​Apples and Pears at Chester Farm

Sample material from some of Chester Farm's surviving orchard trees has been sent off to the Brogdale Collection for identification. The identification results are listed below the tree map.

Not only have the Chester Farm gardens produced grapes (see the Thomas Messenger Greenhouse page) but this has been an excellent year for the orchard trees, some of which were absolutely laden. Our photograph shows the delicious Lord Hindlip apples.

The National Fruit Collection at Brogdale is the world's largest collection of fruit trees, holding some 2,200 varieties of apple from all over the world and 550 varieties of pear. They are therefore ideally placed to run a fruit identification service and the Chester Farm team, hoping that this would provide further insight into the garden’s development, sent off material in late 2015.

Various fruit tree tags have also been found during the course of excavation in this area of the site, including some good varieties such as Beauty of Kent and the delightfully named King of the Pippins. There was undoubtedly a Victorian orchard in the southern end of the walled area, and the species still surviving include ones introduced in Victorian times, such as Buerre Hardy pears.

However, it seems that the area was dug up and replanted in the late 1920s, with a mix of Victorian varieties and newer ones, such as the apple Lord Hinslip. This orchard, with double rows of trees, was again dug up in the early 1970s and the few surviving trees probably date from this period. That these include Victorian varieties is simply an indication that these were favoured fruit-producing varieties.

American Mother arose in Worcester County Massachusetts and was first recorded in 1844; it came to England in the latter half of the 19th century. American Mother was widely grown as a garden apple and remains a favourite amateur variety, it has recently become popular on the continent on account of its disease resistance.

This pear tree may be the rootstock that is fruiting rather than a grafted variety. The variety may have been lost a long time ago and the rootstock is now fruiting.

Vicar of Winkfield used to be a quite popular pear in UK orchards, but is more commonly encountered in Northern Europe, where it is known as Le Cure’. It was found in 1760 in a wood by M. Leroy a curate at Villiers-en-Brenne, France.  It was introduced to England by Reverend W.L. Rham of Winkfield in Berkshire and first listed in 1842.

This pear was raised in 1841 by John Williams at Pitmaston, Worcestershire from Duchesse d’Angouleme x Glou Morceau.

Nouveau Poiteau was raised by Van Mons at Louvain Belgium in 1827 and first fruited in 1843. It was named after the pomologist Poiteau. Pomology is a branch of botany that studies and cultivates fruit.

Widely grown in gardens, this handsome pear with beautiful melting juicy flesh perfumed with rose water.  Beurre Hardy was raised in 1820 by M. Bonnet in Boulogne France, named in honour of M. Hardy – Director of the Luxembourg Gardens in Paris and introduced 1840-45.

William Bon Chretien was raised before 1770 at Aldermaston, Berkshire and first named in 1814.The most widely grown pear in the world, although not grown widely in the UK.

Unfortunately, in 2015 there was not enough fruit on tree 10 for Brogdale to make an assessment. We can only hope for better things in 2016.

(Tree 11: may be another Lord Hindlip)

This variety, known since 1790 was a firm Victorian favourite on account of its large size and excellent flavour.

King of the Pippins

Known since 1770, but probably much earlier. A multi-purpose variety, used in France and England as a dessert apple, for cooking and for cider making. Widely grown all over England.

Discovered by John Braddick growing in a hedge near his home at Claygate in Surrey. In 1822 he sent specimens to the London Horticultural Society, who agreed that "it is unquestionably a first rate dessert apple".

The sheer variety of apples and pears grown shows that the Chester Farm household were aiming for self-sufficiency. There were both dessert and cooking apples and pears and there were early, mid and late ripening varieties which would have given them good succession.

Some of the fruits were noted for being good for pickling whilst others for their keeping qualities. Varieties like King of the Pippins would have been carefully packed away in the autumn in a cool, dry place and would have provided fruit for the household right through the winter.