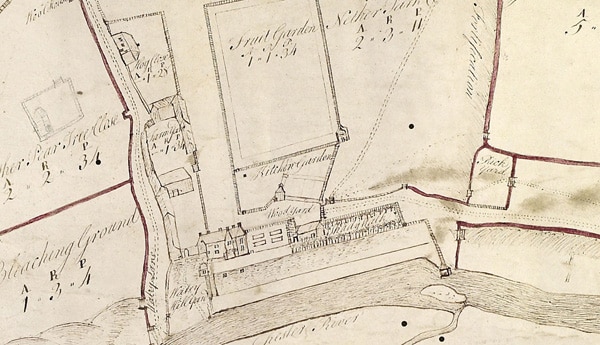 Northamptonshire Archives hold a 1756 plan of Chester Farm. Simply drawn but nonetheless enormously useful to us. In beautiful copper-plate handwriting it names every field and marks every building.

It was drawn on skin, probably sheep's skin and as a result is irregularly shaped and quite small, just 635mm by 575mm at its widest and deepest. It is ink drawn with some few lines shaded in red. In one corner every field is marked with its ARP, that is, its size in acres, roods and perches.

The whole Chester Farm estate at that time being 107 acres, 1 rood and 9 perches. One rood is a quarter of an acre and there are 40 perches in one rood.

Some of the names like Cherry Tree Ground, Upper Pear Tree Close and Nether Pear Tree Close are self-explanatory. Others like Nether Lug and Upper Lug need more research and the area that we call 'Badger Wood', as they have clearly taken it on as their own, was known simply as Twitch.

The Bleaching Ground close by the farm buildings would have been where washing would have been laid out. Spreading laundry in the sun was the best way of whitening it and the stretch of grass set aside for this purpose was called a bleaching ground or green.  Also close to the house is Bee Yard, Fruit Garden, Kitchen Garden, Wood Yard, Hog Close and Shady Walk.

The field where the new visitor car park now is was called Leys, which meant land under temporary grass. The water meadow, then split in two by a water channel, was called Great Holm and Little Holm. Holm translates as either flat ground by a river or an islet – both true in this case as both fields form islands surrounded by the Chester River and the Nene.

Cinquefoil is a plant with five lobed leaves like clover which is used as a fodder crop. The words 'Roman Fortification' are written on all four sides and at the time the plan was produced some of those walls would still have been standing.

In England the process of Enclosure began during the 16th century and it became a widespread feature of the agricultural landscape, with common land ceasing to be for communal use. The word field came to mean only the unenclosed and open arable land; most of what would now be called 'fields' would then have been called closes.

The path along the Roman north ramparts which takes you from the visitor car park towards Chester Farm is marked as The Drift – so that is what we will call it from now on.