At the time that David Dickinson was farm manager, Chester Farm was owned by Whitworths who were based at Victoria Mills, Wellingborough. 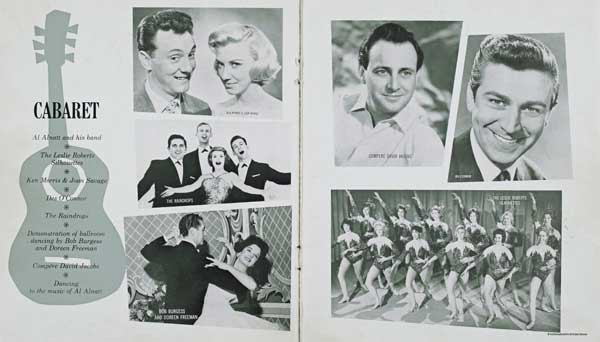 Under the chairmanship of Mr Frank George, Whitworths had grown hugely from just flour milling to producing a whole range of grocery products including dried fruit, Weetabix, bakeries, dried peas and savoury stuffings.

"A business man through and through" is how David describes Mr Frank George, "he may have been ruthless in business but he was the kindest man you could hope to meet." Though David admits that he had quite an ego, rather demonstrated by the fact that Mr Frank George liked everyone to refer to him as 'The Guv'nor'.

Every five years he would hold a birthday party to which everyone was invited and David shows me two programmes which were produced  for Frank's 75th and 80th birthdays. These were clearly grand affairs, the 75th party in 1962 features a packed cabaret line-up that includes amongst others, David Jacobs as compere, Des O'Connor and ballroom dancing champions Bob Burgess and Doreen Freeman.

The 80th birthday programme includes details of his business successes and his sporting interests which included breeding gun dogs and pigeon racing. The programme says "In a crowded life, 'The Guv'nor' has still found time to enjoy outdoor pursuits – and enjoy them to some purpose.

A splendid array of sporting cups show that he has the knack of succeeding at anything he puts his mind to…" There is even a picture of his most successful pigeon 'Fecham Lass' with the caption "Pigeon-racing is a flourishing sport in this country and 'The Guv'nor' has long been one of the leading owners – as his numerous trophies testify." 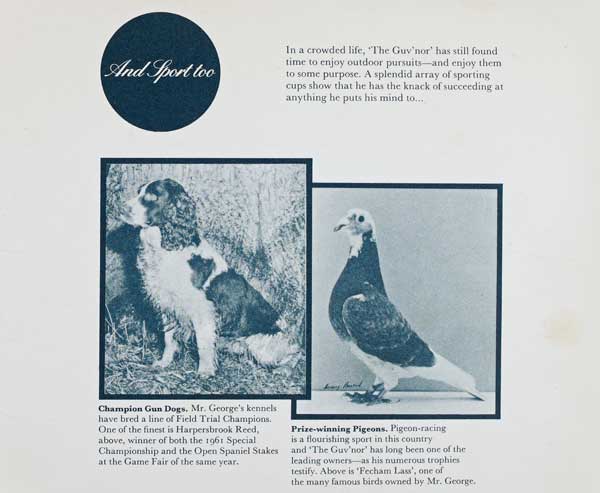 David remembers that one of the two houses on the A45 layby just on the edge of Chester Farm was where Mr George's pigeon racing manager Horace lived with a large pigeon loft in the garden. He goes onto tell me that Frank George would never accept the prize money for his pigeon racing, but would give it to those who came 2nd and 3rd. His advice to David was whatever you do "always buy the best".

Clearly Frank George wasn't a heritage fan and would never allow any archaeologists on site, but he did give instructions in around 1970 to plant what we now call the West Wood, and this was to provide cover for partridge.

Frank George's rise to power is detailed in the 1967 birthday programme:

At the turn of the century, 6am was the time for an apprentice to begin his day. This was the time that 17 year old Frank George first walked through the gates of Victoria Mills – to be greeted by a ferocious-looking foreman, watch in hand for checking arrivals. Young Frank was not the man to be dismayed by over-zealous foremen; he liked his work and set to it with such a will that he was soon earning promotion.

Leaving the company in 1912, Mr George managed two St Albans mills with such a conspicuous success that in 1922 he was invited back to become Mills manager at Wellingborough. It was a challenging time – a period of post-war depression and short time for the workers – but thanks to Mr George's ability and drive, Whitworth's were soon on the road to their present pre-eminent position among the independent millers of this country.

1934 - The beginnings of Weetabix success

This was the year Mr George was elected to the board of Weetabix. He had previously helped this small company during its struggle to get established as a breakfast cereal manufacturer:  but it was not until his hand was at the helm that Weetabix began to go ahead.

1967 - Big companies that are growing bigger

Sixty three years after young Frank George first walked in as an apprentice, Whitworths and Weetabix have become famous companies whose products are household words throughout the length and breadth of the country. Companies that are poised for even greater expansion in the years ahead, and who owe an incalculable debt to the skill and energy of one man – Frank George, 80 today.