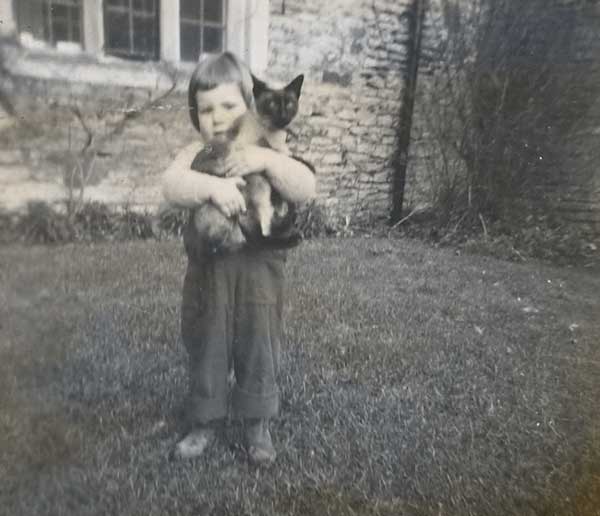 Jayne Clayton and her husband came down from Yorkshire to volunteer on one of our Digs last year. What was the draw of Chester Farm to them?

It turns out that Jayne's father was farm manager here from 1958 to 1972 and lived at Chester House together with his wife, daughter Jayne and son Robert. David Dickinson is now 86, retired and living in Lincolnshire and keen to share his many memories of Chester Farm. We are equally keen to hear them as it brings Chester Farm's more recent past alive and fills in the gaps in our knowledge.

I spend a very happy August day with David and Jayne asking lots of questions and furiously scribbling down the stories about the farm and the people they remembered. They find some lovely pictures for me and in return I have brought progress photos of the build which David is fascinated by. So much came out of our conversation that I have divided the stories into three, of which this is the first.

David didn't start out farming. After he left school in Bedfordshire he became an apprentice cinema projectionist which he did for the next four years, but became increasingly fed up with finishing so late at night. He took up farming being fortunate to work for someone who was an excellent teacher. He then went as livestock manager on the Wakefield Estate of five farms in Northamptonshire, with the promise that when the manager of Home Farm retired he would be promoted.

Unfortunately the rather eccentric owner suddenly decided to sell the whole estate. He then went as farm bailiff in Warwickshire for the splendidly named Captain The Honourable Robert St Vincent Parker-Jervis, who was a descendant of Admiral Jervis who won the Battle of Cape St Vincent. Known as PJ for short, he was little seen until the hunting season, being often abroad for skiing or at St Tropez.

David didn't stay there long, coming as farm manager to Chester Farm in 1958, accompanied by his wife Phyll, Robert, aged ten and Jayne who was  just two. They described Wellingborough as a lovely little sleepy market town and that when they arrived at Chester Farm both the buildings and land were in a very poor state. They moved into the oldest part of Chester House, the later Georgian section remaining empty and semi-derelict, although well used by Jayne and Robert as their personal adventure play space!

David had the Messenger greenhouse restored and made a vegetable garden where the tennis court had been (site of the July 2017 archaeological dig) and the orchard planted by Newton Whitworth was very productive with apples, pears, damsons, plums and greengages and figs, peaches and nectarines growing along the wall and forced rhubarb under big chimney pots. David also bred canaries so he grew chickweed especially for them.

They referred to the Chester River as the 'back water', the viaduct as '14 arches' and the land where the Roman town is, as 'Barrow Field'. The two fields either side of Lime Avenue were known as 'The Park'. There was an ice house built into the bank beneath the kitchen window and Newton Whitworth had it converted into a boiler house.

"The most idyllic place to grow up in"

The ironstone quarrying had finished but it provided another great space for the children to play in and as Jayne says "Chester Farm provided the most idyllic place to grow up in".  The River Nene was popular with pleasure boaters and the water meadows would flood all winter from November to April and "it was great for sliding on when it froze over" says Jayne. "The stench when it went down!" remembers David, but ever the farmer "the silt deposited made it very fertile".

The cottages near to Chester House were in a terrible state and although an Irishman and his wife lived in one, David believes they did so rent free. The adjacent garages used to house a generator which supplied electricity to the house, and they both remember the huge glass bottles wrapped in straw which contained the distilled water for topping the batteries up. The cottages in the top yard were in much better condition, Kenny who worked on the farm lived in one and a Captain in charge of the Wellingborough army cadets in another.

For the last two years that the Dickinsons were at Chester Farm they lived at Chester Lodge up on the main road as it provided more modern accommodation. They left in 1972 when David got a job as farm manager on an estate in Lincolnshire. He retired nearly 20 years ago aged 67. David and his wife Phyll, who was a nurse were married for 61 years but sadly she passed away recently. Jayne is a nurse in Yorkshire and Robert lives in Canada.

Grateful thanks to them for giving up their time to be interviewed for the three Farm Manager Stories.