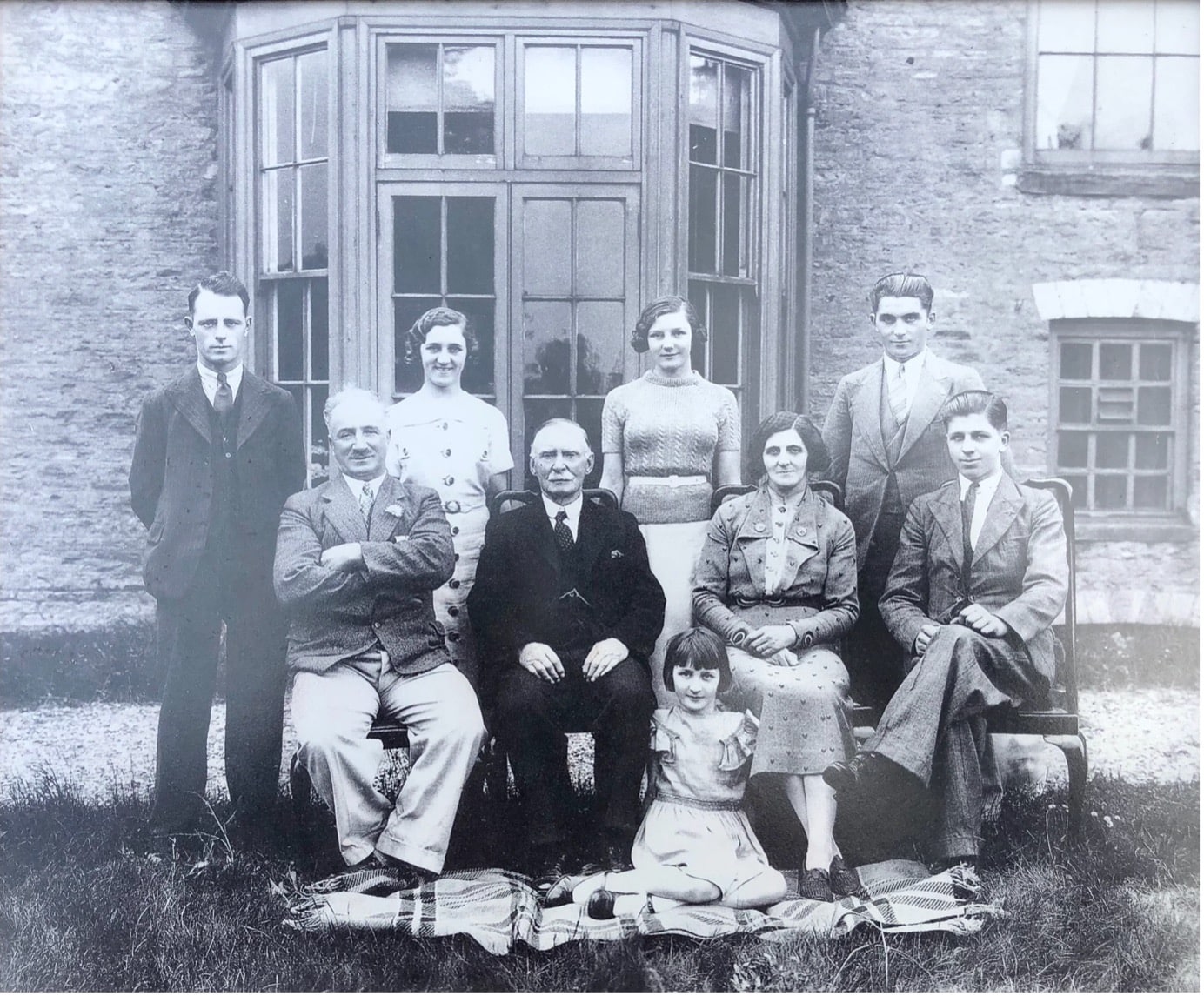 Read memories of the Clarke family at Chester Farm by Richard Clarke (son of George) and Richard “Ricky” Lyne (son of Pauline):

Our Grandfather, Captain William Bailey Clarke MC, was born in Bugbrooke, Northants, in 1885 and joined the Royal Field Artillery in 1902. He married Charlotte Clarke (nee Clarke), a Book-Keeper from Athlone, Ireland, in 1911. He served in France during the First World War and resigned from the Army in 1920 with the rank of Captain and a Military Cross award.

Captain Clarke’s movements after that date are not known for certain, but we do know that he lived at Southview Farm (off the B571 Wellingborough to Irthlingborough road), then Chester Lodge, which was apparently built for him, before he moved into Chester Farm (as it was then known) in 1929.

Newton Whitworth (Of Whitworth Bros) lived at Chester Farm until his death in 1929. Captain Clarke and his family moved in, becoming tenant farmers. The family photo above, dated approximately 1936, shows himself, his wife Charlotte, her father George and their six children, Joyce, Eric, Harry, George, Pauline and Christine, born in that order between 1912 and 1926.

Of William and Charlotte’s grandchildren, only three were born whilst their parents lived and worked Chester Farm and were too young to form real memories of it. However, Ricky and I met with Michael Webb* in December of 2021 at Chester House as he knew the Clarke family well whilst they farmed there. Therefore, whilst family history is from our own research, most of this Chester House memoir comes from Michael Webb’s excellent memory.

All of the children were involved in the running of the farm before their adult lives took them on differing paths. Eric to the Milk Marketing Board, Joyce to Whitworths (Frank George’s secretary), Pauline into Ellis & Everards Builders Merchants, George into British Road Services, Christine into Nursing. Harry, with his wife, Lilian and children Jane and Michael, continued farming, living in one of a pair of adjoining cottages (now gone) at the top end of the farm. He worked the farm with two or three labourers.

Among Michael Webb’s earliest recollection, as soon as he was old enough to walk across the field between Chester Lodge (now his family’s residence) and Chester Farm, was going down to ‘bottom meadow’ with Harry to fetch the cows in for milking and being given a ride back to the farm on the back of a cow named Granny!

He also remembers Harry teaching him to drive the old Fordson tractor before he was heavy enough to hold down the combined clutch and brake!

Captain Clarke was able to purchase two new Fordson Tractors, one narrow, one wide track in order to be able to perform necessary farm work – and of course the children would ride along – sitting on the mudguards. Harry often took the tractor out in the public roads even though it had no, or broken, lights with Michael (Webb) hanging on.

George Clarke suffered a broken ankle when one of his brothers pushed him off a haystack. The culprit shall not be named! All in all, not very health and safety!

During the Second World War, two German and three Italian prisoners of war lived at and worked on the farm. One of the Germans was very pro-Nazi, the other far less so. Pauline recounted to Ricky how one of the Germans used to steal eggs and to use on his hair in order to maintain his blonde colour!

One of the Italians enjoyed his time there so much that he wrote to the farm after the war and asked if he could return. Sadly, we don’t know if he did.

Michael also recalls that the farm grew wheat (not supplied to Weetabix – they imported from Canada and Australia, requiring stronger wheat than grown in the UK), mangelwurzels to feed the cattle and kale.

The flood plain off the Nene was always allowed to flood in winter as the water prevented frost attack on the grass (which grows under water). Also, sediment from the river proved nutrition for the grass when the floods receded making for good grass for hay.

Living at the Farm

There was originally a corridor running the length of the first floor (Destroyed with so much else by the devastating fire of 2010). In Christine’s bedroom off that corridor (now the large room on the 1st floor, down the flight of three steps) there was a priest hole.

As a small boy, Michael Webb remembers being in the bedroom with Christine and Pauline who threatened to put him in it if he misbehaved! Michael recalls it as “a scary dark hole”. This does tally with Christine’s few words about the priest hole being off her bedroom. Obviously, all trace of it was lost in the fire which destroyed so much of the house.

Ricky (who, with his parents, did visit the farm as a child), Michael and Michael (Webb) recall the snooker table in what is now the Cafe, just inside the front door.

The wood panelling throughout the house was “very dark” back then, compared to today’s refit.

The small room under the main staircase is where Charlotte kept her sewing supplies. We believe her sewing was mostly clothing repairs for the family.

The outside toilets adjacent to the end of the house used to be the generator room. Next to that was the garage for Captain Clarke’s J Type Vauxhall which we assume came from York, Ward and Rowlett which was then and still is today, a Vauxhall dealership. York, Ward and Rowlett is also where George worked as an apprentice before WWII.

George had been a Japanese Prisoner of War during WWII and upon his release and eventual return to the farm, Michael Webb recalls being warned by his mother that when he first saw him, he should not look at or talk to George, due to his extreme poor health.

Captain Clarke died in 1958, which effectively ended the Clarke’s time and tenancy at Chester Farm. By this time, Frank George of Weetabix (and previously Whitworths) now owned Chester farm and there appears to have been friction between him and Harry resulting in Harry not taking on the farm. (Reported by Michael Webb as Frank feeling that Harry was the “wrong sort of chap” due to keeping Greyhounds). Harry moved to Allotment Farm, which was years later developed into housing (now Buckwell Close, off Hardwick Road) in Wellingborough.

Michael Webb went to Captain Clarke’s funeral and subsequent wake which was held at the Farm, having been delegated to fetch the sandwiches etc from Saxby’s in Wellingborough. At the time, Saxby’s produced wonderful Pork Pies and other meat and pastry products. In a super link to the Estate of today, Saxby’s produce excellent Cider which is sold from their shop on the Estate.

Captain and Charlotte Clarke’s grandchildren, great-grandchildren and one great-great grandchild were privileged to be able to hold our annual family reunion at Chester House in October of 2021. A memorable and moving occasion for us all.

* Michael Webb was born at Chester Lodge adjacent to the top of Lime Avenue, just off the A45, and lived there between 1936 and 1957. He spent much of his early years, from seven years old (1943) in the company of Harry, helping out on the farm.