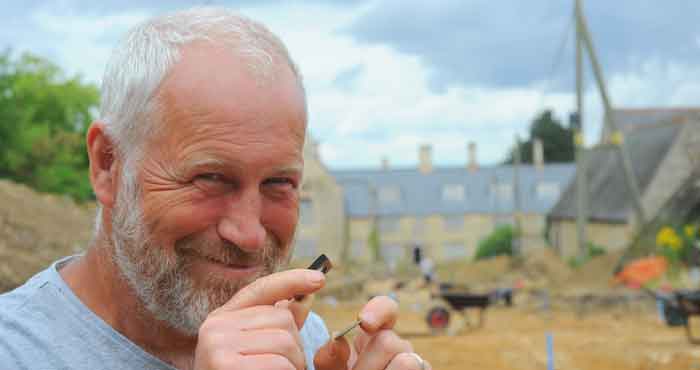 We met Archaeologist Ian Meadows at Chester Farm during the July 2016 dig. This is the second week of the dig and there is an impressively long trench stretching from the end of Lime Avenue almost to the front door of Chester House. The first week was very hot which proved challenging for Ian and some 20 volunteers who help him each day.

Ian walks down the sloping trench with me explaining what everyone is doing and what they have found to date. The trench is about 30 – 40 cms deep, but at varying points there are deeper holes and in most is sat a knee-padded volunteer wielding a trowel and brush.

Some are bath tub in size, but others are smaller; volunteer Bruce is kneeling in a medieval hole but is digging out an adjacent Roman pit.

Starting at the top of the slope, Ian shows me 18th century wheel ruts which have been infilled with limestone which volunteer Frances is carefully removing. A Roman well comes next, annoyingly slap bang in the middle of the drive. Its position requires it to be cleared, but this is the second well that has been found in a matter of weeks, the first contained a broken Samian bowl.

​The steepness of the road meant that water running down towards the house was clearly always a problem and at various points there are ditches, soakaways and culverts which all seem to have some flood alleviation role. A side trench leads off the main trench and here a limestone track, probably dating to the late 1700's was possibly an agricultural entrance to the middle courtyard.  A circular wall has been found which is almost certainly a late medieval dovecote, a great indicator of the social standing of the site.

Some findings are less clear and require further investigation, but Ian is wondering if a series of pits that are spatially gathered together in a very deliberate way could indicate a former orchard; whilst a really compacted area set with large pieces of limestone is currently a mystery  - clearly deliberate, but to date he is not sure what it is or why it's there.

Close to the house is the foundations of an ironstone building which predates Chester House (1600) and then even closer is a line of post holes, probably the wall posts of a timber hall, which could be late Saxon or medieval. 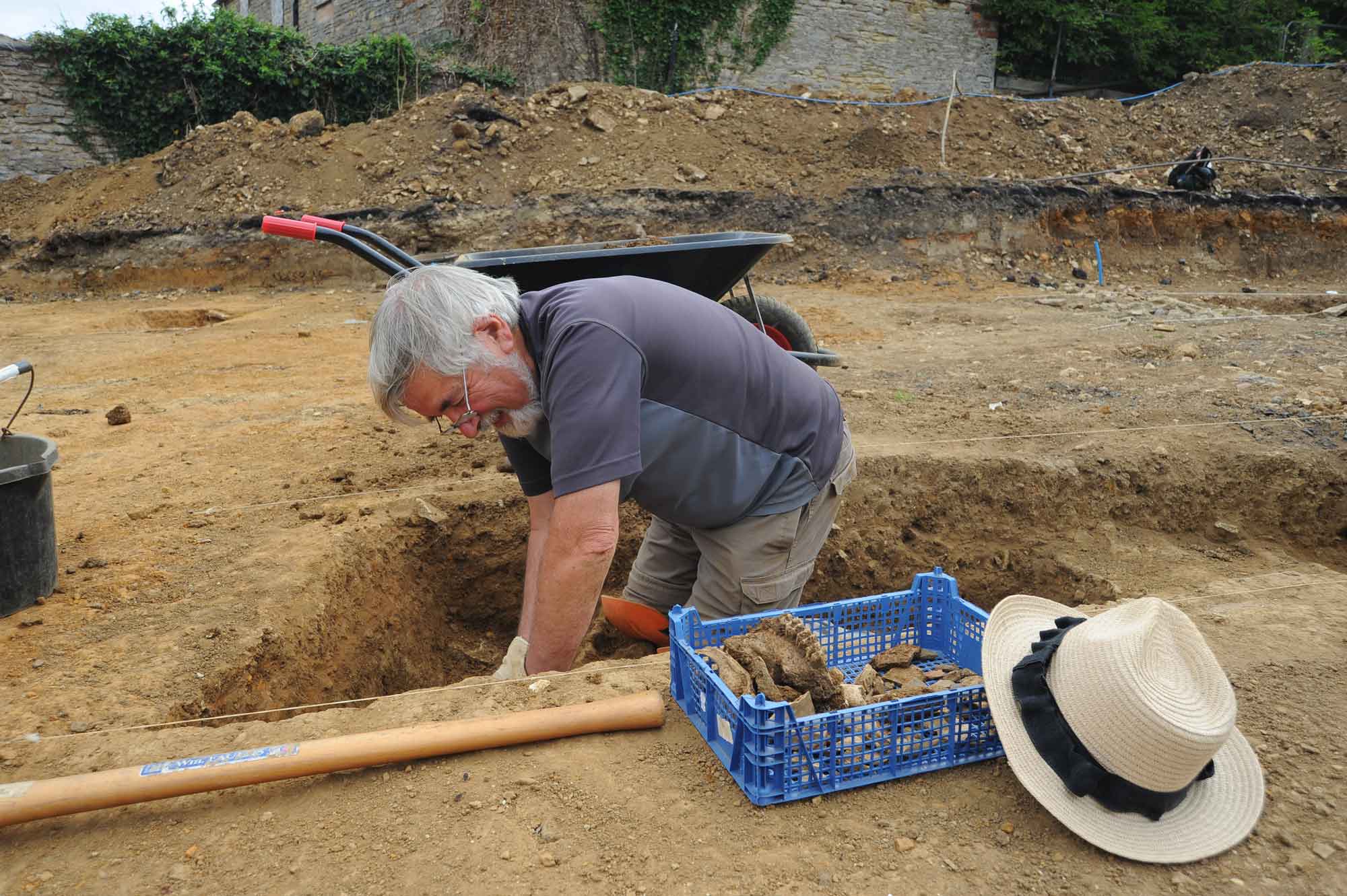 Ian gets out just a small selection of their finds for me to look at. A Roman bronze hair pin from the 2nd/3rd century. It is about 4 inches long and reflects the fact that hairstyles were becoming more elaborate and Romans were nothing if not fashion conscious. A section of a mould blown Roman bottle follows, it is thick glass and would have been hexagonal  and chunky  and used for storage; glass vessels don't appear in Britain before the Roman conquest.

A spindle whorl and another hair pin, both Roman and made from bone.  There is a delightful mandolin shaped spoon which is almost two utensils in one, as Roman spoons always have thin spiky handles so they can be used to stab food in the manner of a fork. There are plenty of coins, using the magnifying glass to look at one I can see the letters CAR, so we know that this one is minted by Emperor Carausius. There is a 2nd century plate brooch, glass beads, a medieval ring brooch and a late medieval spectacle buckle.

Many of the items need cleaning and examination, like the two pieces of pot that Ian shows me that could be either Iron Age or early Saxon, he's not sure, but further investigation should resolve it.