The Northampton Mercury began in 1720 and in an edition dated 8 August 1869, describes itself as ‘Being a Collection of the most Material Occurrences, Foreign & Domestick. Together with An Account of Trade’.

When it ceased publication in 2015 it was the oldest continuously published newspaper in the UK.

For those of us researching the history of Chester Farm it is a great source of information. Just like today bad news sells newspapers and so court cases can provide rich pickings and we can find Chester Farm mentions under bankruptcies, assaults, thefts, accidents and deaths.

"Thomas Nourish, of Irchester, was charged with stealing potatoes to the value of 8d, the property of Mr Wm. Blott. – It appeared that the defendant had been engaged to dig potatoes and had purloined some and sent them home by his little girl. – The prosecutor begged the Bench would be as lenient as they could, and a fine of 15s and costs were inflicted."

“Edward Wykes, labourer, was brought up in custody on a charge of stealing potatoes, value 6d, the property of Mr. William Blott, of Chester-house….The prisoner pleaded not guilty, and made a roundabout and most improbable defence. – The Bench said that, but for Mr Blott's recommendation, they should have dealt differently with the case, as there was no doubt he had taken them with a felonious intent – Discharged with a caution.”

"William Bugby, a lad in the employ of Mr. William Blott, was charged with stealing pears, value 1s, the property of his employer…..Mr Blott did not wish to press the case, but only to show that the defendant and others must not gather the fruit under the trees. – Defendant was discharged on payment of costs."

He had been thrashing during the week for Mr W. Blott, and was finishing up to depart with his machine when he fell from the top, in consequence of stepping on a broken board. Several ribs were dislocated and other bodily injuries sustained, and he was not able to be removed home for several days."

"Fatal Accident – An accident, which terminated fatally, occurred on Wednesday to a labourer of the name of William Parrot, in the employ of Mr. William Blott.

The deceased was engaged…in thatching a hayrick, when he lost his balance and fell headlong to the ground and sustained such severe spinal injury that he died the following day. The deceased lived at one of the cottages at Chester House, where he died after the accident. He has left a widow and 10 children."

“Serious Accident – On Saturday morning, a horse-keeper named Taylor, at Chester House, in the employ of William Blott, was run over near the Gas Works by a loaded wagon, and received such injuries that it is feared recovery is hopeless. He was taken to the Infirmary the same day. We have since heard the man is dead."

All is not gloom and doom as the occasional flower show, ploughing match and the like introduces a more everyday feel to the cycle of the rural year.

"North Northamptonshire Agricultural Association – A sweepstakes of five sovs. each was proposed by Mr. Nathaniel Goosey, for the best 50 long-woolled wether tegs, bred and wholly fed on the exhibitor's farm."

[A wether is a castrated male sheep and a teg is a sheep in its second year.]

“Northamptonshire and Wellingborough Agricultural Societies -To the ploughman, being in the employ of a member, who shall plough in the best manner, with two horses abreast, without a driver, half-an-acre of land, not less than 4 ½ inches deep, within 3 ½ hours - £5 to George Bond, ploughman to Mrs Goosey, Chester House…..A tea-pot, value £10 to Mrs Goosey , Chester House, owner of first team.”

"Irchester Flower Show…The show was well attended during the day, the Rushden Silver Band being present to play selections, as well as for dancing. In the evening there was swarming a greasy pole for a leg of mutton, and other amusements."

Of enormous help and interest are the notices of auctions and their accompanying catalogues which list every item of furniture from the grandest Sheraton barometer to the more prosaic patent mangle. On each occasion when an auction is held at Chester Farm we get an intriguing glimpse into the social status of the inhabitants at that moment in time. 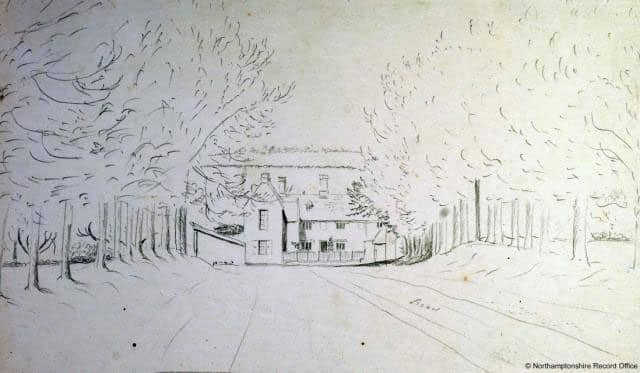 "Valuable Manor Estate, Northamptonshire To be Sold by Auction – A Valuable Freehold Estate most eligibly situate in the Parish of Irchester, nearly contiguous to the capital Market-Town of Wellingborough, and easy Distances from Higham-Ferrers, Thrapston, Kettering and Northampton; comprising the Manor , or reputed Manor, of Chester by the Water.

A capital farm, with a substantial old Mansion-House, Offices, Gardens, Orchard, and Demesne Land of fine deep Staple Meadow, Pasture, and Arable, containing about three Hundred and Eleven Acres, Tythe-free, except about one Hundred and four Acres, subdivided with excellent Quick Fences, Part bounded by the navigable River Nen, in which there is a Right of Fishery; also about fifteen Acres in Irthlingborough Meadow.

The Whole, except twenty Acres in Hand, in the Occupation of Mr Stephen Goosey, Tenant at Will. The Estate is situate in a fine fertile sporting Part of the Country, capable of the greatest Improvement, to render it a complete Residence for a genteel Family, or Gentleman Sportsman or Farmer."

"To be sold by Auction by Mr Cleaver, For Ready Money, on the Chester House Farm….About 100 superior Ash Trees, many of them of large dimensions; and 70 Elms, of good quality, and useful dimensions. Also, about 1,600 capital Fagots, and a large quantity of other Fire Wood in lots."

"Chester House Farm, near Wellingborough. Excellent Live and Dead Farming Stock To Be Sold by Auction – The Auctioneers call special attention to this Sale, the Beast and  Sheep being of exceptional quality, the Cart Horses a powerful team, and the Implements and Machinery in good order and up-to-date, many being as good as new."