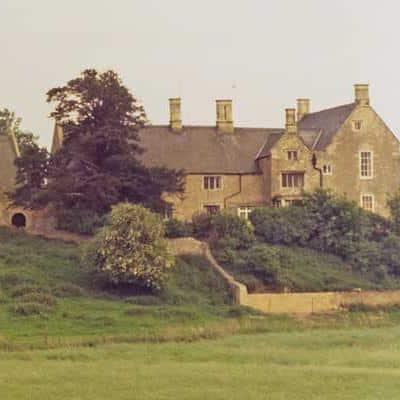 Life on the farm

David Dickinson, farm manager at Chester Farm 1958-1972 describes the farm as being "in a pretty awful state" when they arrived.

This picture of Chester Farm above was kindly given to us by David – it is particularly interesting because it predates the fire of 2010.

The land and buildings were in a very poor state of repair, so he was kept busy getting the land into good heart and building a Dutch barn and housing for the cattle. The farm then was about a 1000 acres and it was a mixed farm with cattle and sheep, and growing wheat, barley, turnips and kale.

They grew 60-70 acres of potatoes and when they were ready to harvest gypsy families would come each year to pick them. Jayne remembers one potato picking time when she had chickenpox, the gypsy children would visit her bringing bunches of wild flowers, but all hoping to catch chickenpox too!

The farm was at this time owned by Whitworths (see story about Mr Frank George of Whitworths) and they used to fatten the cattle on Weetabix from their factory at Burton Latimer. Jayne describes going into the granary to nibble on the still warm from the oven Weetabix as they were delivered from the nearby factory.

The A45 was then just a quiet country road and David would think nothing of driving 400 sheep down it with just one sheepdog  who would lie down in each gateway to ensure the sheep stayed on the road. Apparently Rex was a wonderful sheepdog but if he got too hot would leave the sheep to their own devices while he rushed down to the river to cool down.

In the Barrow Field, where the Roman walled town is they were forbidden to plough any deeper than four inches and when David first arrived at Chester Farm he sent samples of every field off for analysis. The Barrow Field was revealed to have impossibly high levels of potash and phosphates and we are looking into why this might be.

David told me that it was commonplace to find bones and pottery all over the place and he shows me an arrow head that he found on top of a mole hill. At one time he had a large collection of Roman coins that he had found, but sadly these were stolen.

There were many stone coffins found and a previous tenant had broken these up to make the end of culverts. David does remember making a fireplace in Chester House using Roman stone collected from Barrow Field.

This lovely picture is of gamekeeper Jack Neil, nicknamed 'The Professor' by Mr Frank George. He was supposed to be shooting rabbits but Jayne's brother Robert had crept up on him to take this photograph of him taking a quick nap!

On arrival, David was horrified to find out from the local vet that much of the Nene Valley, including Chester Farm was infected with anthrax. This had come from imported hides and had passed down the Nene from water used in the tanning industry in Wellingborough.

Sheep never became infected  but all cattle had to be immunised on arrival and before they were turned out. The police were allocated a ton of wood and a ton of coal and if any cattle became infected they would be cremated in pits for a minimum of 36 hours.

In 1963 a Roman coin hoard was found by workmen involved in road alterations along the A45 from Little Irchester to the railway bridge. The hoard was in a pot containing by weight 42,000 silver-washed copper Antoniniani of the mid to late 3rd century AD.

David was called to inspect the pot which was buried about 3 feet under the topsoil, in clay; it had been covered with a Collyweston stone tile and he agreed that the coins should be sent to the Northampton museum.

From 1965 onwards Wellingborough began to change and grow. Land was compulsorily purchased for a prison and then for housing and an industrial estate and the 1000 acres of Chester Farm was gradually whittled down to under 400.

In 1972 David Dickinson decided to leave, becoming farm manager of the Tumby Estate in Lincolnshire. He tells me that they were sad to leave but very excited about the new job.