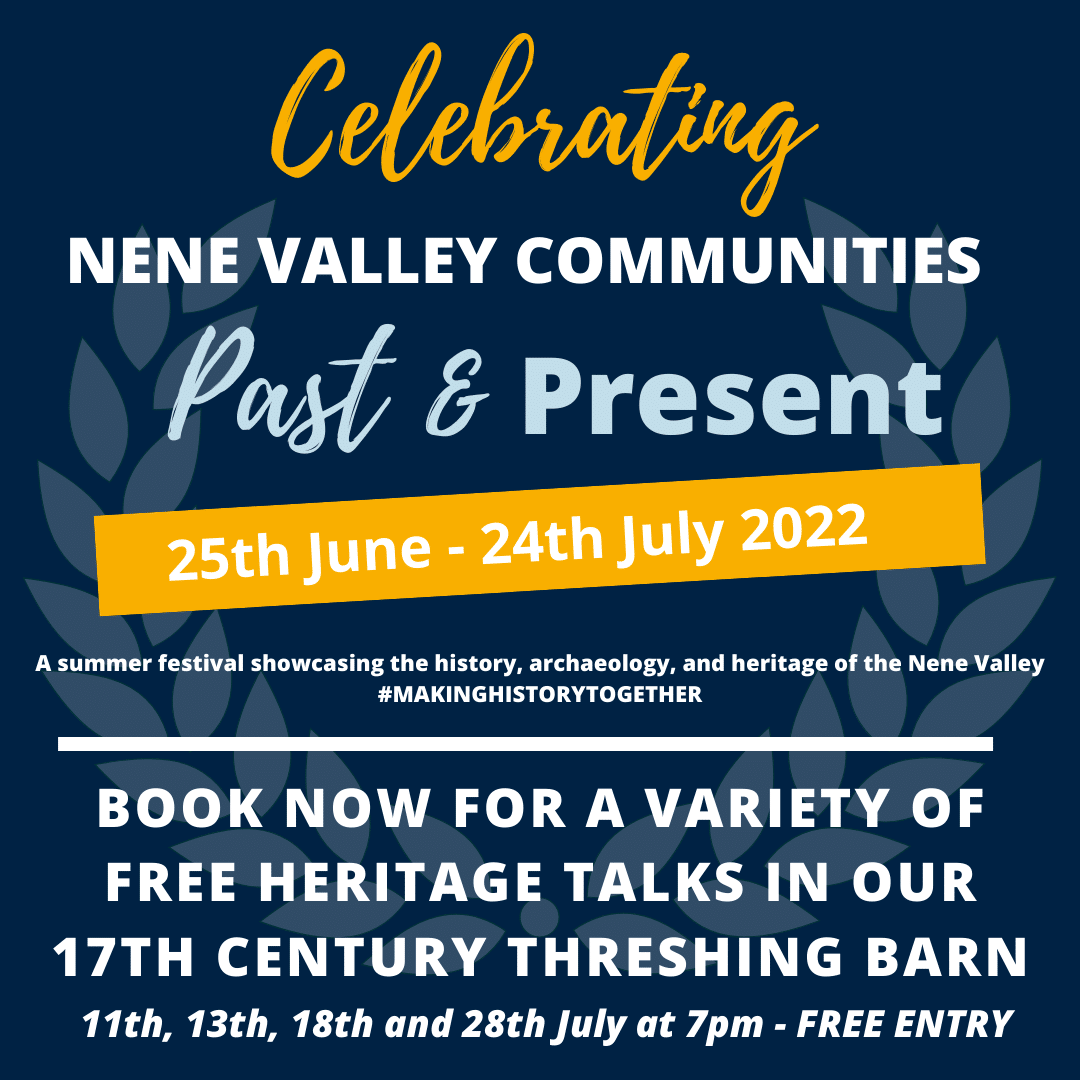 As part of the Festival, we are pleased to announce a series of FREE evening talks at the Chester House Estate in July. The talks will highlight amazing discoveries from recent archaeological excavations and new research taking place in Northamptonshire.

All talks are FREE but require booking. To read the abstract for a talk and to book a place please read the information below.
All talks start at 7pm in the Threshing Barn at the Chester House Estate and are scheduled to take 45 minutes to an hour with time for questions.
If attending an evening talk, please park in the Lime Avenue Car Park. The bar will be open for refreshments before and after the talk.

The talks are as follows:

The Catuvellauni are a tribe that feature in the late Iron Age political landscape of southern Britain and whilst their origins are far from clear, the tribe quickly seems to have grown and prospered under Roman rule. With the tribal centre focussed on Verulamium, its territory covered Hertfordshire, Bedfordshire, Northamptonshire, along with parts of Buckinghamshire, Oxfordshire, Cambridgeshire, Middlesex and north-east Surrey.

Drawing on the results of research and investigation, much of which has featured in the journals of the Northamptonshire Archaeological Society over the years, this presentation seeks to present a perspective on late Iron Age and Roman Northamptonshire in the context of the Catuvellaunian expansion north of St Albans and offers some thoughts on how the area might have been organised and administered in the Roman period.

Michael J Curtis is the Chair of the Northamptonshire Archaeological Society. He is also a tutor for Northamptonshire Adult Learning for their archaeology and Roman courses and a PhD student at the University of Leicester studying late 1st century BC to 3rd century AD ports and harbours on Crete.

This talk presents the preliminary results of the nationally significant archaeological and award-winning excavations undertaken by Oxford Archaeology East on the estate of a large Roman villa in Northamptonshire. The incredible well-preserved remains included a Romano-British building site, a temple-mausoleum converted to a tile factory, various manufactories, a Roman road and much, much more! For lovers of the Roman world, it ranks amongst the most exciting and important Late Romano-British archaeology encountered from anywhere Roman Britain and it’s a journey not to be missed

Paddy Lambert is a Project Officer at Oxford Archaeology East and specialises in the history and material culture of the Roman world. He ran the excavations.

The Chester House Estate sits right on the edge of the Roman town of Irchester. During the rebuilding of the road access to Chester House in 2014, Lime Avenue was found to cross through a 4th-century Roman cemetery, one of three cemeteries associated with the town. MOLA archaeologists working on the site in 2014 excavated over seventy human burials, as well as other features relating to the Roman town and later landscape. This talk from a leading MOLA osteologist Chris Chinnock will consider how the site compares to others in the region, and dive deep into the long history of Irchester Roman town. Come along to explore the cemetery and its funerary rites, and find out what fascinating details, hidden in the skeletons themselves, can tell us about the lives of people living and dying here 1700 years ago.

Chris Chinnock is a Reports and Publication Officer and Human Osteologist at Museum of London Archaeology.

Thursday 28th July – Pots and people in the past and present: Tales of creativity in Roman and modern Northamptonshire – Adam Sutton, MOLA.

Archaeology has much to tell us about the ways that people were creative in the past. Artefacts of all kinds bear traces of their production and use, and these allow archaeologists to establish the ‘norms’ of past creative practices as well as where people evidently innovated by diverging from these norms. These observations allow us to tell very human stories about how people worked, lived, and shared skills in the distant past.

Creativity arguably occupies a very different place in modern society, but no less of an important one. Recent work in archaeological engagement shows that creative practices such as crafting and artistic pursuits can both create excellent learning environments and promote participants’ wellbeing.

In this talk, archaeologist Dr Adam Sutton will discuss the results of Crafts and Community, his ongoing collaboration with the Northamptonshire Archaeological Resource Centre (ARC) at the Chester House Estate. Crafts and Community seeks to investigate creativity from different perspectives. The first part of the project saw the pursuit of evidence of craft practices employed in pottery-making in early Roman Northamptonshire, using objects from the ARC Collection. Cutting-edge analysis has allowed these practices to be established and placed within the context of Romano-British industry. These results are themselves revealing of the different and highly creative ways that Romano-British potters worked, and allow us to start telling the stories of these craftspeople, who are often overlooked and are entirely absent from the historical record. The second part of the project has seen this new information on Roman craft practices translated into a series of practical pottery-making workshops offered to communities in Northamptonshire. These workshops ran with creativity in mind: while structured around Roman techniques, participants were free to experiment and innovate as they wanted to, creating a rich and informal learning environment. By blending archaeological research with creative engagement, a number of important insights have been made into the stories of both past craftspeople and modern communities, as well as learning points with which to improve engagement practice. These insights will be the focus of this talk.

Dr Adam Sutton is the Iron Age and Roman pottery specialist for Museum of London Archaeology.